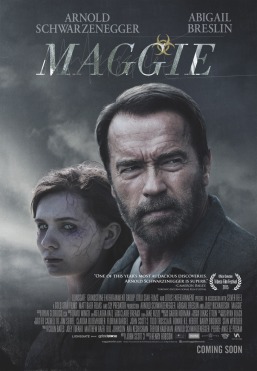 Rated PG-13 for disturbing thematic material including bloody images, and some language

Plot: In the wake of a devastating viral outbreak, Wade Vogel cares for his infected daughter, Maggie, knowing she will eventually turn into something inhuman – and deadly.

Maggie is a serious dystopian family zombie drama, starring Arnold Schwarzenegger. If that’s not enough to pique your curiosity, you may be undead yourself. As an added incentive, it’s also pretty good.

Hobson and Scott are first-time filmmakers, but they’ve seen enough world’s-end cinema to get the look and feel just right. Everything is shot in Apocalypse Gray, with empty buildings all around and thunder constantly rumbling in the background (although it never seems to rain).

Every scene is this somber, but there are tiny flashes of hope: The outbreak is being contained and infection rates are dropping. People are starting to go back to normal life, at least outside the big cities. And Wade, despite all evidence to the contrary, is convinced that Maggie can somehow beat the incurable infection.

Isolated in their farmhouse (which might be in Missouri somewhere – people keep referring to KC), Wade and Maggie struggle against the nervous fear of Maggie’s stepmother and the warnings of local authorities about how this will end. There’s even a sweet, desperate romance between Maggie and another infected teen.

As you might have guessed, there aren’t many zombie attacks, although the ones we do see are disturbing. These aren’t hordes of anonymous undead, just neighbors and family members who weren’t locked away to die in quarantine. It’s strangely, sadly realistic, something you don’t expect to find in a zombie movie.

You also don’t expect it in a Schwarzenegger movie. He’s still not much of an actor, but he turns down the superstar wattage to near zero, and manages a haggard and sympathetic performance. Breslin and Richardson can act circles around him (despite Richardson’s distractingly bad accent), but he holds his own.

Maggie handles its material with sensitivity, making it an interesting, if very odd, take on an overdone genre. Hobson’s directing style is monotonously grim, but he and Scott know exactly what they’re going for, and they get there. With the Terminator and his zombie daughter.